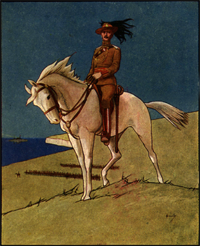 Due to the contribution of the Colonial Irregulars from across the British Dominions, it came to pass that in the final months of the South African War, certain influential Colonials suggested it would be beneficial to British interest if a Regiment could be formed in England. This Regiment, with its personnel recruited from elements representing all the Kings overseas dominions and “formed from men who were either born, or who had lived, in the Colonies, and were now residing in the United Kingdom”. The authorities were approached and agreed that a regiment of the new Imperial Yeomanry should be raised as embodied in the suggestion. Thus in 1902 the 4th Country of London Imperial Yeomanry came into being with the sub-title “The Kings Colonials.” The future King George, then Prince of Wales, supported the idea by becoming Colonel-in-Chief of the new unit.

In 1906 a Troop, comprised mainly of men from shipping companies with Colonial connections was formed in Liverpool and attached to A Squadron. Detachments of undergraduates from the Dominions were formed at Oxford and Cambridge Universities – these men later formed an entire Squadron. In 1908 the Regiment was transferred to the new Territorial Army and in 1912 created a Special Reserve of Cavalry Regiment.

The Regiment was mobilised in WWI, two Squadrons went abroad in April, 1915 as Divisional Cavalry, C Squadron to 47th and B Squadron to 48th Divisions. Headquarters and A Squadron joined the 12th Division in the same capacity in June, 1915.

A year later, just before the beginning of the Battle of the Somme, the three Squadrons were collected together and the unit became the Corps Cavalry Regiment of IV Corps. It led the advance of IV Corps in March, 1917 in the direction of St Quentin and later took part in the battles of Passchendaele and Cambrai.

A recruiting and Training Base was formed in Ireland as a Reserve Regiment supplying the necessary replacements of personnel to the First Regiment in The Field and helped deal with the troubles of 1916.

From December, 1917, to March, 1918, it was in Italy, returning in time to fight in the battle of the Lys. It rendered most important service in defending the line of the Lawe and, subsequently, the La Basse Canal, near Hinges, suffering casualties amounting to 60 per cent, of its strength.

Very many distinguished officers were originally Troopers in the King Edward’s Horse with an estimated 500 commissioned from the ranks of the Regiment during the period 1914 – 1918.

King Edwards Horse was disbanded in 1924. The Battle Honours awarded for the Great War were Loos, Ypres, Pilkem, Cambrai, Lys, Estaires, Hazebrouck, Pursuit to Mons, Italy. Of particular interest is the battle Honour Estaires which commemorates where many of the regiment gave their lives at the defence of Vielle Chapelle bridgehead in April 1918.

In 1921 a memorial stone was laid at Vielle Chapelle. The consecration ceremony was touching and at the last roll call a choir of village children answered each name with the words, “Mort sur le champ d’honneur” (died on the field of honour).